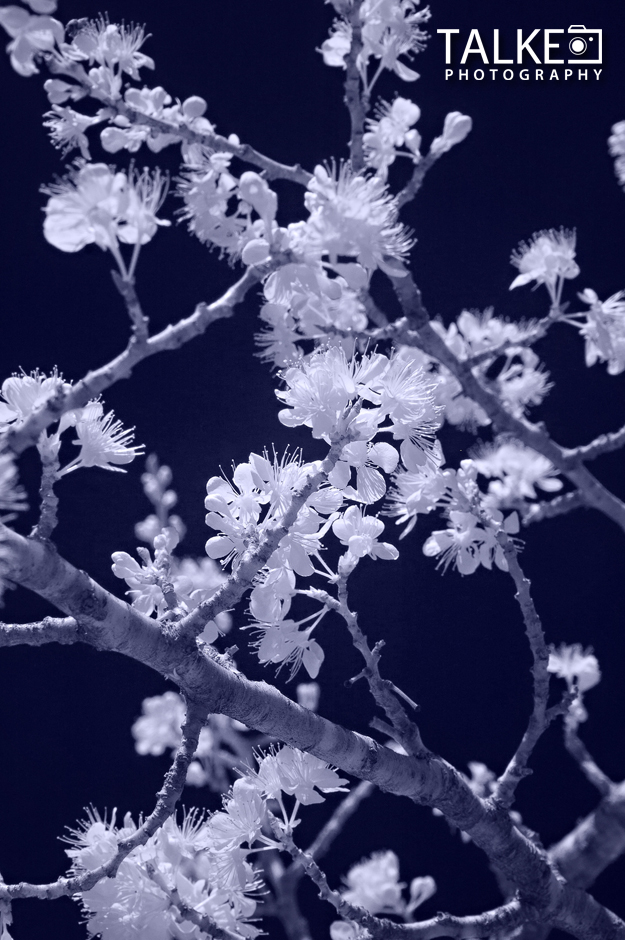 From last spring while walking around Mayfield Park here in Austin one lunch…this one tree had some lovely flowers blooming and I shot it in IR. The added bokeh gives it a nice feel. We are about a week away here in Texas from getting our spring flowers…hope winter was not too bad for you where you live! My IR camera will be ready for the foliage!!

From my recent visit…here is a Cherry Blossom tree in near full bloom from Tokyo!  This tree was the only one this far along at this early point of the spring…so a special tree!   I enjoy seeing the Japanese architecture in the shot as well!   There was a temple nearby…I will post a shot from there soon.  These days there are Cherry Blossoms all over the US…Washington DC, New York City, San Francisco.  Possible gifts from Japan! Arigato Gozaimasu!!!   =)

Some info from the web:  In Japan cherry blossoms also symbolize clouds due to their nature of blooming en masse, besides being an enduring metaphor for the ephemeral nature of life, an aspect of Japanese cultural tradition that is often associated with Buddhistic influence, and which is embodied in the concept of mono no aware. The association of the cherry blossom with mono no aware dates back to 18th-century scholar Motoori Norinaga. The transience of the blossoms, the extreme beauty and quick death, has often been associated with mortality; for this reason, cherry blossoms are richly symbolic, and have been utilized often in Japanese art, manga, anime, and film, as well as at musical performances for ambient effect. The band Kagrra, which is associated with the visual kei movement, is an example of this latter phenomenon. There is at least one popular folk song, originally meant for the shakuhachi (bamboo flute), titled “Sakura”, and several pop songs. The flower is also represented on all manner of consumer goods in Japan, including kimono, stationery, and dishware. Cherry blossom is an omen of good fortune and is also an emblem of love, affection and represents spring. Cherry blossoms are an enduring metaphor for the fleeting nature of life, and as such are frequently depicted in art.