From Chinatown in San Francisco, CA…here is a building off the main street with some cool Red Lamps. Not sure if it is still in business, but I found it looking for some alleys. Add in a little selective color to the HDR makes the shot stand out. Chinatown is def an interesting place to walk around.

Here is an Infrared photo from one cool spot in Austin…Moore’s Crossing.  I have been there twice.  Shot HDR’s, IR’s and did some portrait work there.   Its located in an obscure park and the bridge is actually just placed there and takes you nowhere. …just for pedestrians only.    I have yet to be back at nite…this is when the ghost stories appear…

Info from the web:  Is the wrought iron bridge really haunted? Rumors state that a tragic incident took place on this bridge. The exact time has been lost.  Research has found no evidence to back up this aspiring urban legend. However, as the story goes, a man was hung, by a mob, from one of the cross beams because of a forbidden love affair. Witnesses say after midnight you can see the man hanging from the crossbeam swaying in a slight breeze. Below, a shadow of a female figure is seen looking up in the direction of the swinging body. Many witnesses over the years have reported seeing people walking across the bridge dressed in out-of-date clothing. A couple, while crossing the old narrow bridge by car in the 80’s, speak of a man on foot waving to them as they pass him. They backed up to see the strangely dressed man but found that he had vanished.

From the picturesque Stanford University in Northern California above is a photo from the main quad at the campus.  Stanford has many great photographic locations…the best spot is the Memorial Church….it is only about 500 feet from these pillars.  Some other point of interest are…Arizona Garden, Cantor Arts Center, Campus Sculpture, Hoover Tower, the Dish and much more!  Stanford is about 35 miles south of San Francisco, so stop by if you are ever in the area! 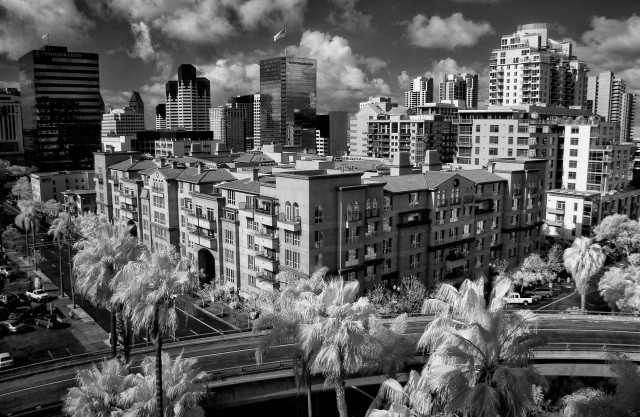 I was in San Diego just recently and was staying at the Holiday Inn near the 5 freeway.  As I have noted before I always ask for a room with a view when checking in…on a high floor!  This is the shot from Floor 9 of downtown San Diego.  It was a rainy few days and luckily the sun was shinning for this shot!  San Diego is a great little city…much to do and see!  San Diego Zoo, Balboa Park, Sea World, Coronado, etc….a must visit if you can make it!!!

Here is some info from the web: San Diego, named after Saint Didacus (Spanish: Diego de Alcalá), is the ninth largest city in the United States, second-largest city in California and 46th largest city in the Americas. Located along the Pacific Ocean on the west coast of the United States, San Diego has a population of 1,279,329 (July 2008 estimate). This coastal city is also the county seat of San Diego County as well as the economic center of the San Diego–Carlsbad–San Marcos Metropolitan Area considered congruent with the county. San Diego is also the largest city of Border Region and is the region’s western anchor. The city was rated the fifth best place to live in 2006 by Money Magazine. According to Forbes the city of San Diego ranks as the fifth wealthiest in the United States. San Diego’s top four industries are manufacturing, defense, tourism, and agriculture. 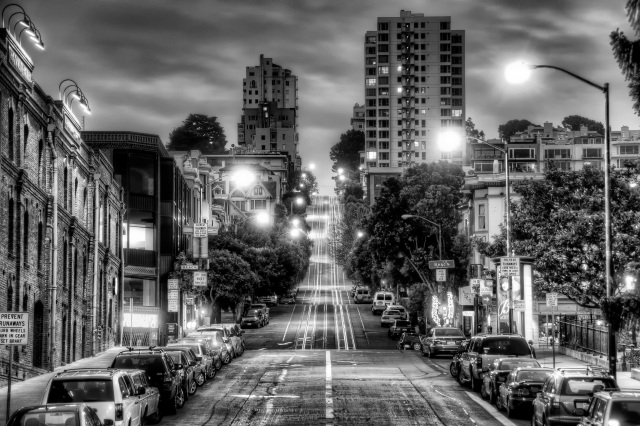 When I was in SF a few weeks back, I had a little time in the early AM to catch some pics near the Wharf.    It was around 6:30 AM and semi-dark out.   The streets were very quiet.   I set up at the bottom of Hyde Street just on the tip of the pier and took this HDR.   Thanks to Nik Software Silver Efex Pro after processing m HDR’s…I now have come to enjoy B&W photos!    This software is amazing!   The black and white conversion has so many tones!!   I liked the color version, but the B&W wins out!

Just at the bottom right is the Hyde Street Cable Car turnaround.   Here you can catch a cable car and have a great ride up that big hill!  If you have ever visited San Francisco or will do so in the future..its is one of my favorite US cities!  I’ll be back soon!

Las Vegas.  I love this place and look forward to visiting whenever possible.   I wish I had conventions there for my work, but unfortunately, we do not.  We try to fly out for a day or so every summer.  I really enjoy just walking around to see the sights and the night lights. Typically during my visits I only have a little time to take photographs….and here is one from this past year.  Something I rarely do…it is a single raw file processed into HDR.  I was playing around today with some old pics and decided to give this one a try.  I liked the HDR…but it needed a little pop.  As I am a fan of selective color…I decided to give it a try! Hope you enjoy this shot!