One of my favorite cities in the world…Vienna. While walking around in previous visits I had taken outside shots of St. Peter’s a few times and had never gone inside. So this day I walked inside… in the middle of a sermon…you can see I was amazed at how stunningly beautiful this church was!! I had to take a photo!! The attendant gave me a scowl as I took out my camera and tripod. But St. Peter must have sent him a message from above as my name is Peter and he allowed me to take a few photographs. LOL Well at least that is my thinking. I showed the attendant a few of my wide angle shots on the back of my camera and he was hopefully impressed. I then took out my fisheye lens and quietly told him…just a few more. He nodded and I took this shot! Sweet. I thanked him and left. Churches are meant for HDR…and especially fisheye HDR! Thanks St. Peter! 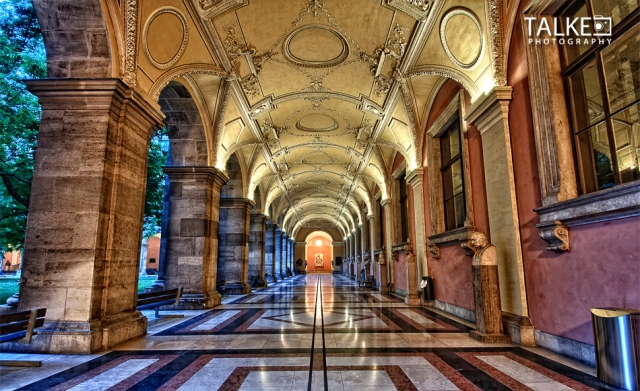 While in Vienna walking around the Ringstrasse, you can find the University of Vienna. It was getting near blue hour this day and I asked the security if I could walk inside to take pics. With no problem I entered the court of this building. Students were studying in the center court and as I explored…I found this cool hallway! Enjoy!

From the stunning city of Vienna, Austria…this is a statue located in the Maria Theresien Platz. Some info from the web: At the center stands a colossal monument honoring empress Maria Theresa, who reigned for forty years. The monument, created in 1888 by Kaspar Zumbusch, shows Maria Theresa seated on top of a large pedestal supported on all sides by Corinthian columns. She is holding a scroll with the Pragmatic Sanction of 1713, an edict issued by Emperor Charles VI that allowed women to ascend the throne.
The empress is surrounded by some of her closest advisors. Four of her generals (von Daun, von Khevenhüller, Traun and von Laudon) are shown on horseback. Von Kaunitz, the chancellor of state, Van Swieten, her physician, Liechtenstein, director of the artillery forces and count von Haugwitz, who reformed the economy and strengthened central authority are shown standing near the pedestal.

Vienna offers so many amazing spots for HDR! This one is from Hofburg. I took this at Blue Hour and the sky was just blue and boring…so I added a textured sky! Some info from the web:

Hofburg Palace is a palace located in Vienna, Austria, that has housed some of the most powerful people in Austrian history, including the Habsburg dynasty, rulers of the Austro-Hungarian empire. It currently serves as the official residence of the President of Austria. It was the Habsburgs’ principal winter residence, as the Schönbrunn Palace was their preferred summer residence. The Hofburg area has been the documented seat of government since 1279 for various empires and republics. The Hofburg has been expanded over the centuries to include: various residences (with the Amalienburg), the chapel (Hofkapelle or Burgkapelle), museums (the Naturhistorisches Museum & Kunsthistorisches Museum), the Imperial Library (Hofbibliothek now the Prunksaal), the treasury (Schatzkammer), the national theatre (Burgtheater), the riding school (Hofreitschule), the horse stables (the Stallburg and Hofstallungen)and the Hofburg Congress Center. 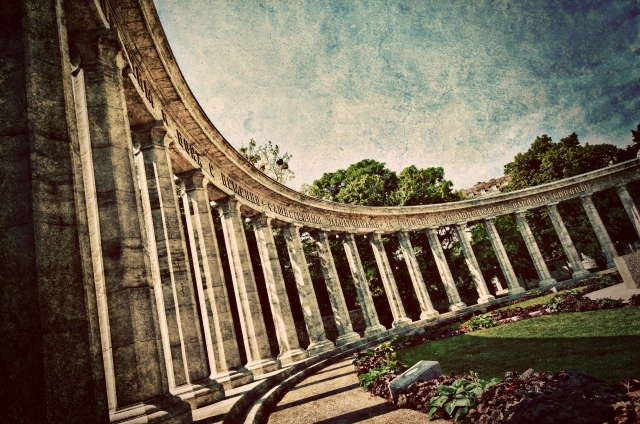 From Vienna, Austria this HDR is of the Denkmal der Roten Armee. There is a statue included, but I just focused on the circular part of the monument. I added an anlge and it kinda feels like a roller coaster! The fun of shooting with different angles!

Some info from the web: Denkmal der Roten Armee was built by the Russians to commemorate 18,000 soldiers who died during the liberation of Vienna from the Germans. At the end of WWII Vienna was divided into different districts governed by different allied forces, of which one was the Russians.

This monument has a 12m high bronze statue of a Soviet soldier (Rotgardisten) holding a Soviet flag set upon a 20m high marble base. The monument was unveiled on19 August 1945 with a ceremony involving representatives from all the Allied forces. The inscription states that the monument ‘honours the soldiers of the Soviet army, pleased for release of Austria from fascism’. Under the terms of the State Treaty of 1955, the Austrians continue to pay for the monument’s upkeep.

Here is the color version. Tough call on which is better? Both have their strong points. Enjoy! 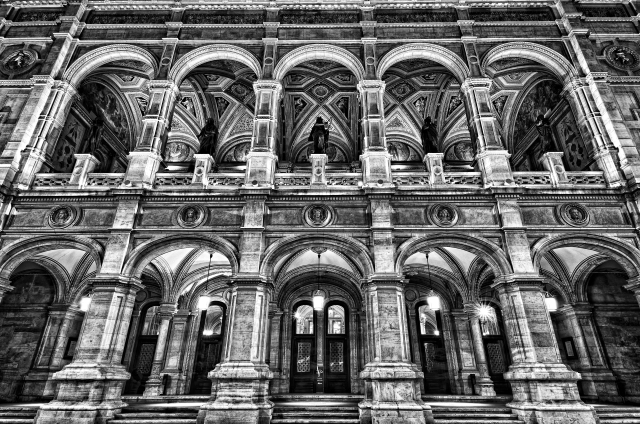 One of the best places 2 explore in Vienna is the Ringstrasse…here you can find some fantastic architecture and amazing sights! The cool thing about Vienna is that it is a small city and you can walk the Ringstrasse in a few hours! I had a free Saturday here and went out a few times to see as much as possible. When it was getting dark, my goal was the opera. Luckily this night there was a big concert at the city hall and they had a major section of the strasse (street) closed down. There was no traffic in front of the Opera House! Sweet! I set up my tripod, dodged a few people and snapped away.

So the battle of black and white vs color rages on…tough to decide when such cool tones arrive when converted to B&W. Today’s post is B&W, Monday will be the color version. I might give the nudge to B&W.