In honor of the French Open going on right now…here is Mr. Roger Federer in HDR (from Palm Springs, CA).  Its a long holiday weekend in the US…and I will be watching lots of tennis from Paris.  If you are a fan…you gotta be routing for another Nadal vs Federer final.  Hope it happens.   Right now I consider Roger the best player ever in tennis.  Rafa Nadal has a chance to unseat him one day…but must stay healthy.   Good luck to Roger this week!  Oh yes…and to my favorite Maria Sharapova as well!! 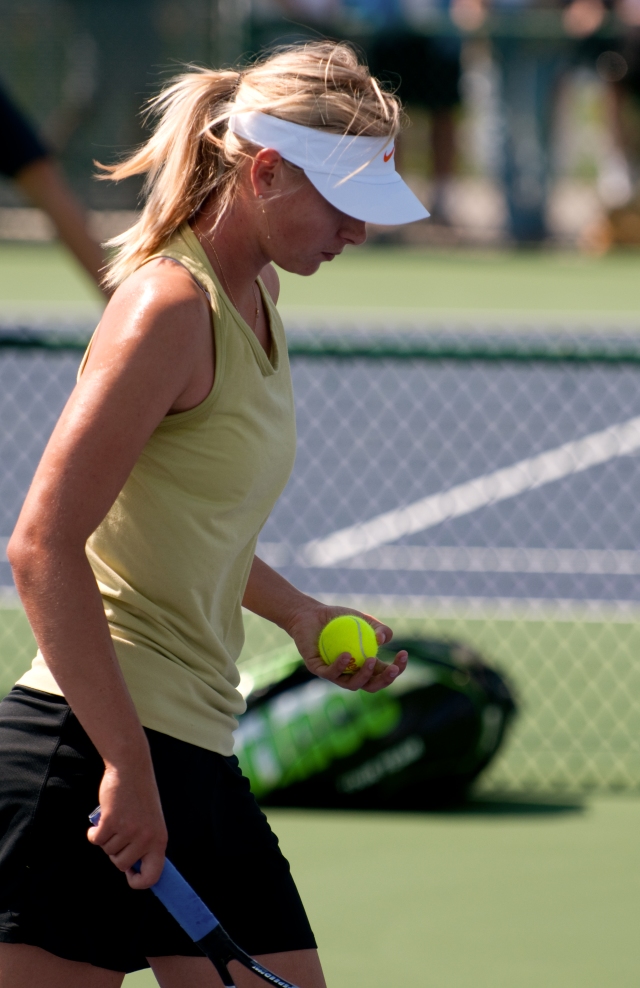 This photo is from last year at the BNP Paribas Open in Indian Wells, CA (Palm Springs).  This tournament is going on right now.  We miss not being there!  As big tennis fans, this to me is the best tournament to attend for fans all year.  Great weather, beautiful location and great players to see!   This shot was of Maria Sharapova’s practice session last year.    She was just coming back from her shoulder surgery.  It is still an issue for her. We watched her last nite vs. Zheng.  Her serve and metal game is a big mess.  She lost.   Sorry Maria!

She is my favorite player on the women’s side.  Her drive and competitiveness is tops in my book!  I hope she can overcome her issues and get back to the top.  She has the ability.  Like the pic above, the ball is in her hand! Sports are a BIG percentage mental.  If your mind has issues, your game (no matter what sport) will falter.

As for the photo….I love to watch the practice sessions at Indian Wells!  You get so close to the best tennis players in the world.  Sometimes they walk among the crowds!   Bust out a big fast lens and you can get some great shots!  We hope to get back to this tournament next year!!!   I think it is 85 degrees there today?  NICE!!  Time to book a flight!

Its almost August and the US Open series will be starting soon.   Time for some great tennis in the US.  Seeing as though my Maria Sharapova post is one of the top views everyday – and she is my favorite….I must admit after I took photos this day at Indian Wells, CA at the BNP Paribas Open (March 2009) – Ana Ivanovic surely is the most photogenic tennis player on the women’s side.   She used to be number one, but has faded to number eleven and is in dire need of a good coach.   Once you lose that top spot, its difficult to gain it back.   When you play tennis – metal toughness is a high percentage of your game.  If you are not there mentally, there is a good chance you will lose.

This photo was taken with the Nikon 70-200 VR.  I noted in my previous posts my admiration for this lens.  I hear from one of my favorite sites….Nikon Rumors that this wonderful lens will be discontinued and a new version will be out this fall!  A perfect time for me to upgrade!  Once I get this new lens version – look for my review!   I’d love to try it at the US Open next year???   Maybe??  I will “serve” up a new photo tomorrow! 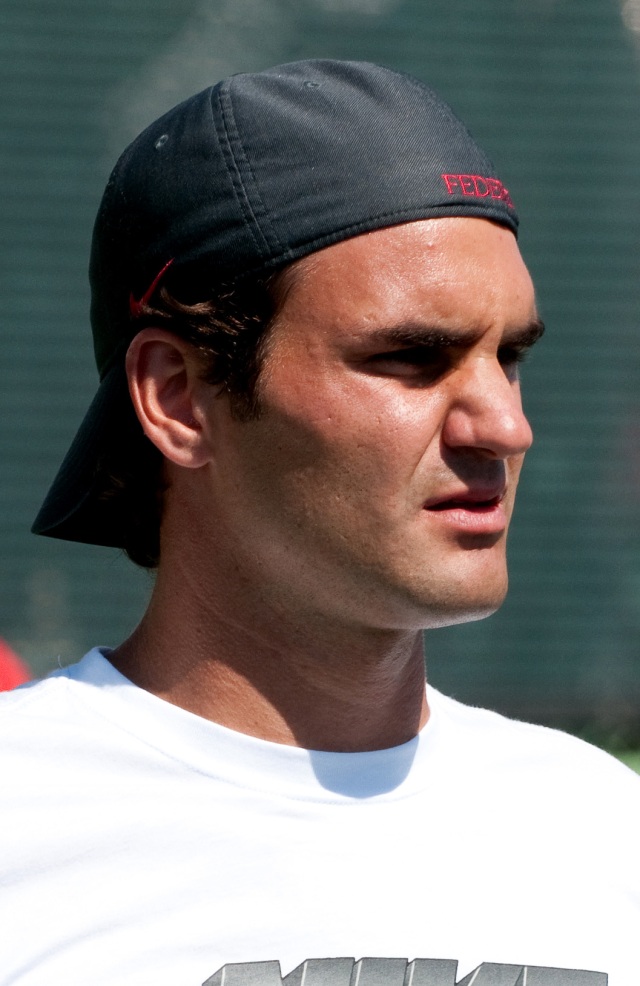 In honor of the most famous tennis tournament going on right now – Wimbledon, here is a photo of probably the best tennis player ever Mr. Roger Federer.  This was taken this past March in Indian Wells, CA at the  BNP Paribas Open.   As a big tennis fan, my first thought would be Pete Sampras as the best, but with Roger winning the French Open last month, it moved him up a notch past Pete.  If Rafa Nadal can stay healthy, he may one day surpass Roger.

This might be one of my best close up tennis shots ever.  I owe this in thanks to the amazing Nikon 70-200 VR lens!  I have talked about this in my previuos tennis posts.  What helped was having the teleconverter.  It added another 100mm focal length to the shot.  Roger was probably 30 feet away from me and this is how close I could get!  Unreal!   I noted that I rented this lens for the week from LensRentals.com  If you are looking to buy a new lens and want to try it out?  Use LensRentals!  A great service and very affordable.  I have been saving for the 70-200 VR – hope to have it later this year!   Hope your day is an Ace! 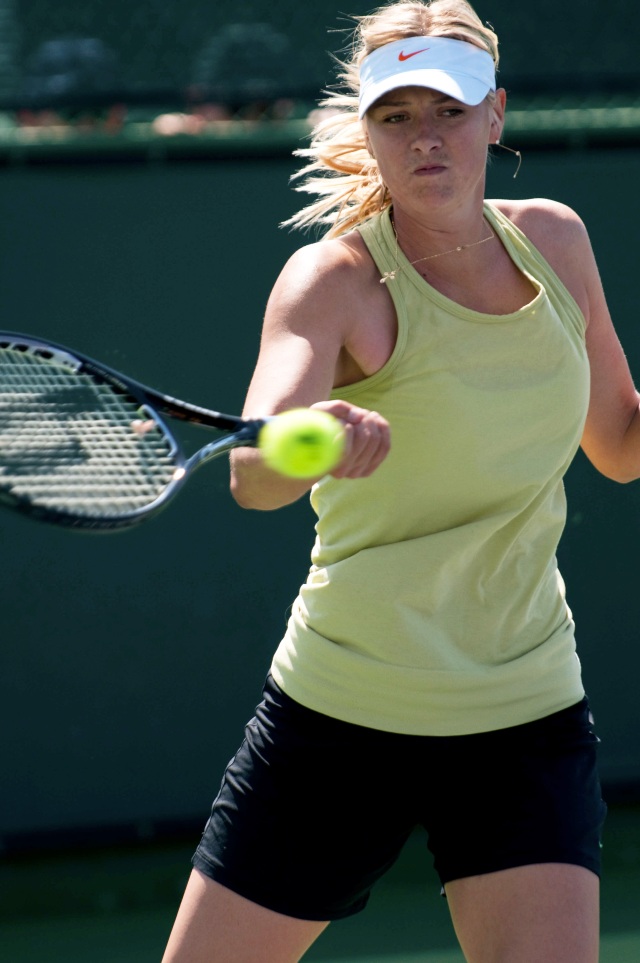 One of our favorite sports is tennis.   Not only to play, but also to watch.   As it is the best time of year for tennis – the French Open and Wimbledon are coming up in the next few weeks.   My favorite women’s tennis player is Maria Sharapova.   She has beauty and a drive to win unlike any other player I have ever seen.   That winning attitude has made her go far in life.   She had been injured over the past year and missed alot of action.   We were lucky to see her only tournment play this year in Indian Wells.  She is now back playing this past week in Poland and I’m sure will regain her form soon!

Our family tries to go to a match every year.   This past year we went to the Indian Wells (Palm Springs, CA) tournament in March.   Per my previous post on Rafael Nadal…this is the best tournament to visit!  Beautiful Palm Springs in March is lovely!   Not only to you get close to the players, but you can watch them practive from only a few feet away!   I had rented through LensRentals.com a dream lens of mine – the Nikon 18-200 VR F/2.8.   This lens was amazing!  What does amazing cost??  $1900.00 just for this lens.   But what it can do blew me away.   I added a teleconverter to the lens and this added another 100mm of action to my camera.  As you can tell by the picture above…so close!  I was about 30 feet away from Sharapova to get this shot.

It was my first time shooting with such a big lens and using it in conjunction with sports.  So I had a learning process.  This shot is solid, but needs a little EV+ kick.  I will learn next time to work better with shadows.  I also took this hand held.  With so many people around it was difficult to manuever such a lens.  If you click on the link above you can see how big this lens is.  I’d estimate with my camera body, teleconverter, lens and the hood – the length of this outfit was around 18-20 inches!  Wow!  I overheard a few people around me say “that guy is getting great shots!”  Hopefully I will get this lens this year.  If not, I may rent it again for some baseball action.

We met Sharapova later the next day.  She was signing autographs and my 4 year old gave her a flower and Maria thanked her signed a poster for her and laughed  “hey isnt this poster bigger than you?”  Thank you to Maria…she was so nice to us!    Hope you think this photo is an “Ace”!

I am a big sports fan…basically any sport is ok with me!   Tennis is one of my favorites to play and to watch.  This was taken at the BNP Paribas tennis tournament in Palm Springs, CA this past week.  We have attended many tournaments through the years and this is the best tournament to go to for tennis!   It is about 80-85 degrees and sunny everyday in Palm Springs in March…one day we even had a cool breeze!   The stadiums are well spread out and food and drinks are located perfectly.  As you walk into the event there are about 10-15 practice courts next to the stadiums.   We attend the early rounds in order to see all the players.  But another advantage in this tournament is that most all players practice in front of the fans.  You are basically 10 feet away from your favorite players.  If you are lucky…autographs are not too hard to get!  We met Maria Sharapova…she is of my favs….got a few autographs…my daughter gave her a red flower she was holding and Maria thanked her kindly!  Thanks Maria for being so nice!   I’m sure its hard being famous.

As I knew we were going to this tournament…I had been eyeing a new Nikon lens.  The 70-200 VR f/2.8.  I had read all the reviews and wanted to give it a try.  I listen to photogrpahy podcasts as I am always trying to learn everyday and just recently in the TWIP Podcast the mentioned a company called Lens Rentals.  They have a web site  www.lensrentals.com  ..here you can basically rent any lens you want!  The prices are pretty good!   This lens costs $1700+ dollars if you by it from a store.  To me alot of money to just buy it hope it works for you.   This service was a great opportunity to give it a try and test the performance of the lens.

I rented the lens for 2 weeks….$163.00…including shipping to you and back!  It arrived via Fed Ex in 2 days and my first day with the lens was at my daughters soccer game.  I already had in my possesion a teleconverter…the Nikon TC14IIE. So it added about another 100mm focal length to the lens.    You can get different teleconverters to add distance to your lenses (mostly they only work on the bigger lenses).  But in some cases you may lose quality and performance.   Read up before buying one.   The TC14IIE is one of the best for adding equal quality and barely losing any preformance.   So at the soccer game I took 400 pics that day.  Addded to that it was photo day for the team and I gave the lens a try for portraits as well.  All of my action shots I used the lens hand held.  Its big, but I had no problems with the weight.

After the first day….one word…AMAZING!  The lens was the best lens I had ever used and seen in action!   The portrait shots had fantastic bokeh (background blur)!!   The action shots with the correct shutter speed were unreal…add the f/2.8 and it adds bokeh even to the action shots.   So with one day of action in my pocket I was ready for the tennis tournament!

It was the second day we were were there…all the favs had practiced…I have lots of pics of Sharapova, Federer, Blake, Ivanovic, Jankovic, Safina, Hewitt, Tsonga, etc…..and I had not seen Nadal yet.  I saw a big crowd gather on one practice court…there he was…Nadal.   He is the mens number one player in the world and could possibly become one of the greatest of all time.   Just watching this guy is unreal.  You get the sense of power, drive and the feeling that even at number one…he is trying to improve his game.  Great characteristics to emulate!

So the crowd was 3-6 people deep…I had to fight in to get about 1 person back…luckily I am somewhat tall…I could stand tippy toe over most peoples heads.  I had the camera, lens and teleconverter all set to go!  I took about 50 shots of Nadal.   I wanted to capture action….to truly test the lens.  Going through the pics…I can easily say…its a must buy!!!   The clarity and quality of my pics are wonderful!   I had some blurry ones (due to hand held and tippy toeing the shots)…but overall most were great…so practice makes perfect…but having a lens ike this definately helps!   The hood of the lens fully extended occasionally bumped a few guys on the head while I was trying to get some shots…sorry dudes!  LOL