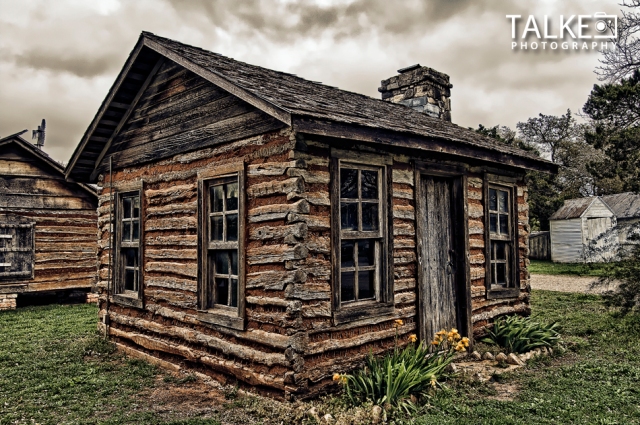 From a local town near Austin…Round Rock, you can find this cool location called Old Settlers Park. It is located right next to Dell Diamond (Round Rock Epxress – baseball team) and is one super location for portraits. I was scouting it out one day and loved the old style Texas feel. In Texas you can find a few of these refurbished old cabins in certain towns.

Some info from the web: Following the end of the American Civil War a group of Confederate veterans held a reunion in Georgetown on August 27, 1904, for the old settlers of Williamson County and their descendants. The invitation promised “good music, plenty to eat, and above all a warm welcome.” The event was well-attended, and reunions — now called Old Settlers Association (OSA) reunions — have been held annually ever since. After the initial one, the event was moved to Round Rock and eventually a structure was built (along with three restored log cabins) in the Palm Valley area of Round Rock, in front of Old Settlers Park, just off Highway 79 in east Round Rock. All members of the organization are descendants of Williamson County residents prior to 1904. OSA has approximately 50 active members and 300 members total. The Old Settlers Association today is a social and educational group, with the purpose of facilitating social activities, as well as collecting and preserving important historical information and facts. The facilities are rented for meetings, arts and craft and collectable shows, events, parties, weddings and rehearsal dinners.