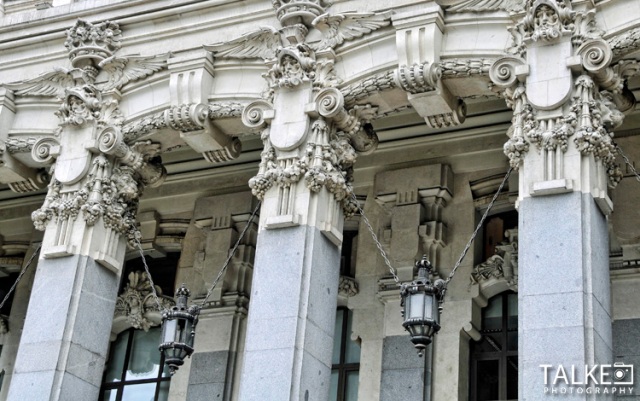 I had only visited Madrid once, but enjoyed visiting!  It was a Sunday afternoon and the city was celebrating something this day…so people where everywhere having fun.  I walked around for a bit taking photos and just loved the architecture!  Although this building is somewhat new…look at the details!  I used a plug-in called Topaz Adjust to bring out some texture.  They have done a great job on this old city. I wish I had more time to explore!

Here is some info from the web: While Madrid possesses a modern infrastructure, it has preserved the look and feel of many of its historic neighbourhoods and streets. Its landmarks include the huge Royal Palace of Madrid; the Teatro Real(Royal theatre) with its restored 1850 Opera House; the Buen Retiro park, founded in 1631; the imposing 19th-century National Library building (founded in 1712) containing some of Spain’s historical archives; an archaeological museum; and three superb art museums: Prado Museum, which hosts one of the finest art collections in the world, the Museo Nacional Centro de Arte Reina Sofía, a museum of modern art, and the Thyssen-Bornemisza Museum, housed in the renovated Villahermosa Palace. 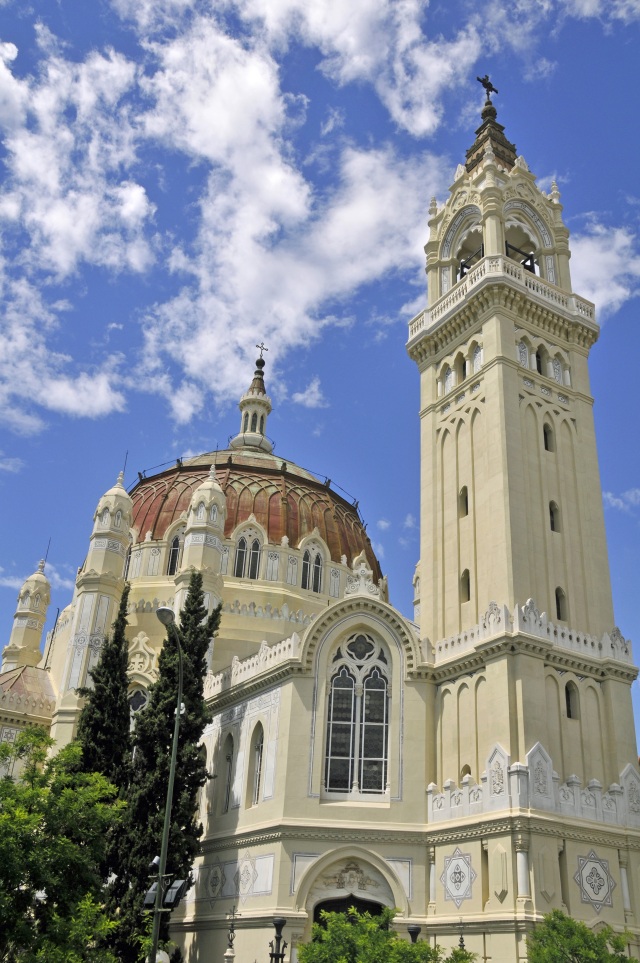 One of the most lovely cities in the world is Madrid, Spain.  The culture and people are just so nice!  Here is some info on Madrid from the web: Madrid  is the capital and largest city of Spain. It is the third-most populous municipality in the European Union after Greater London and Berlin, and its metropolitan area is the third-most populous city by urban area in the European Union after Paris and London.

The city is located on the river Manzanares in the centre of both the country and the Community of Madrid (which comprises the city of Madrid, its conurbation and extended suburbs and villages); this community is bordered by the autonomous communities of Castile and León and Castile-La Mancha. As the capital city of Spain, seat of government, and residence of the Spanish monarch, Madrid is also the political centre of Spain.

I had an afternoon to walk the city and it was amazing!  This photo is one of the beautiful churches in the city called Parroquia San Manuel y San Benito….which means the Parish Church of St. Immanuel and St. Benedict.  This neo-Byzantine style building was projected in 1902 by architect Fernando Arbós Tremanti (1840-1926) and built between 1902 and 1910.

I have yet to explore Spain, but from what I have seen in Madrid, places like Barcelona are a must!  Hasta La Vista Madrid! 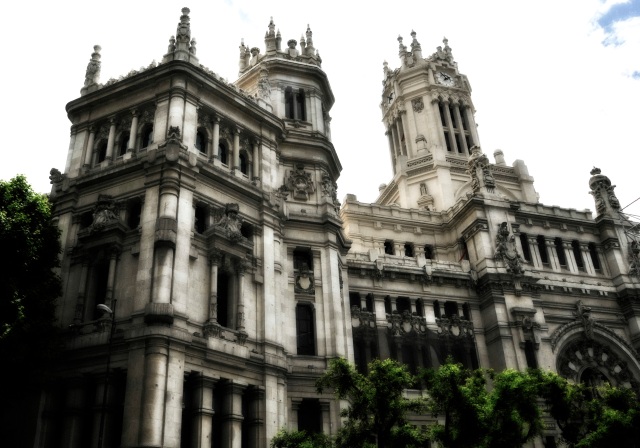 I had a day last summer to enjoy Madrid, Spain.  It was my first visit to this country.  I stayed in the middle of the city and walked around for an hour enjoying the sights.  I then took a hop-on-hop-off bus tour.  It is a beautiful little city.  As it was a Sunday and there was a city-wide event going on – they closed off most of the streets for live music and sporting events.  It was nice to see everyone walking around enjoying life.  I had wanted to take a picture of the famous Madrid Post office, but most of it was covered by a big stage.  It still was very impressive!   Here is a picture of it with a little cool photoshop effect added to it using Color Efex Pro 3 (Nik Software).

Lots to see and way too much for one afternoon.  I would enjoy visiting again.  The food and atmosphere was great and the Spanish people were so nice!   Some great places to visit in Madrid are Plaza Mayor, Royal Palace, Prado Museum and the Post office (above pic).   I really wanted to get a nite shot of the Post office….hopefully on my next visit!    This is one place I would enjoy exploring again!   Maybe I’ll get a chance later this year?