We are deep into winter and who wouldn’t want to take a trip to FLA right now! Stay warm…it is almost spring! 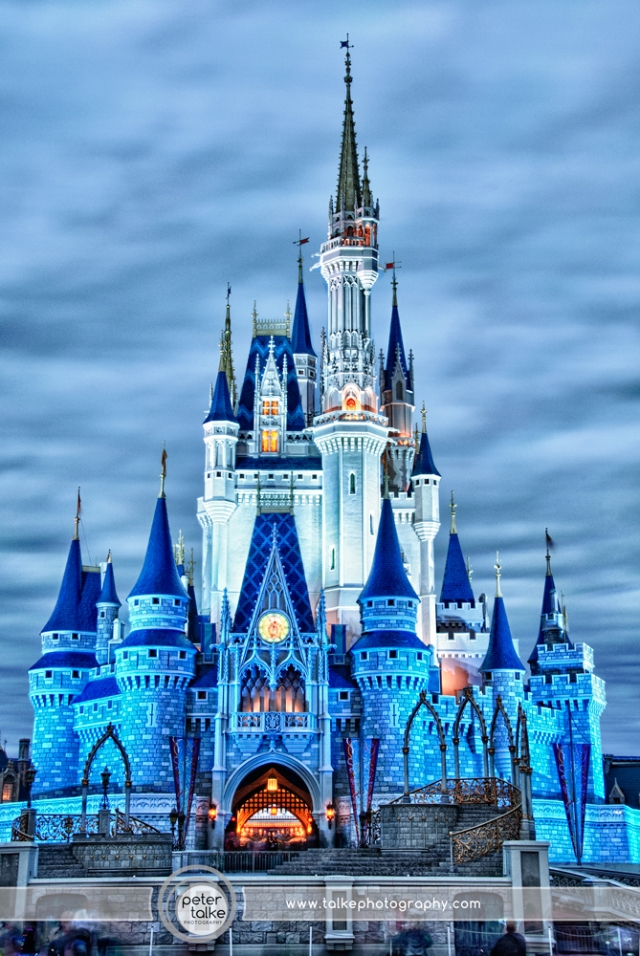 Been a while since we lived in Florida. I miss heading down to Disney World every few months. We now have Disneyland here in SoCal…I think Disney World is a bit better. But SoCal has CA Adventure! I guess I should be happy either way…many people love to vacation in both spots…I have had both within 30 mins of my house. Hope you are enjoying your summer….only a few weeks left!! 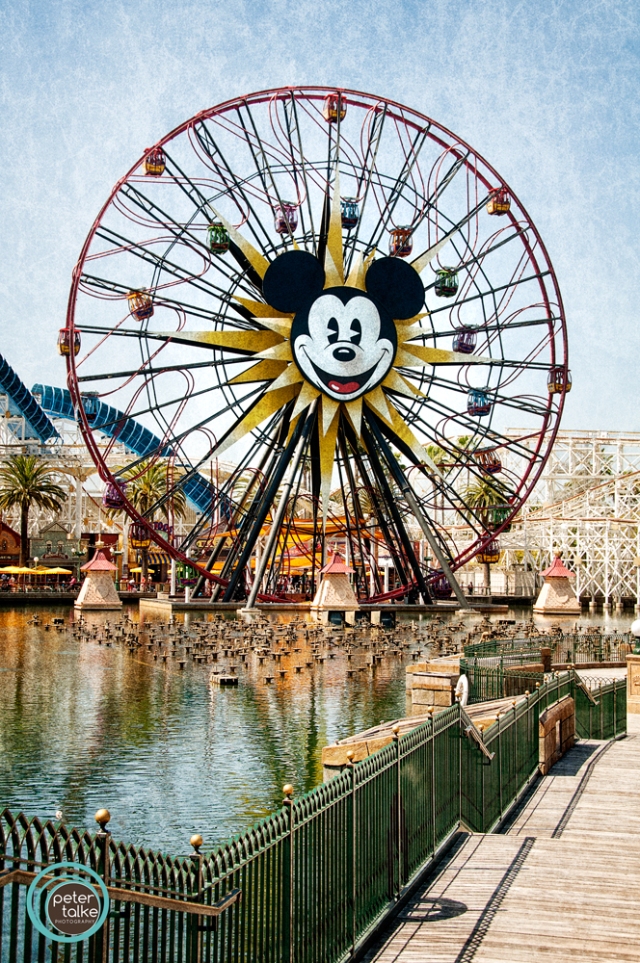 We live about 20 mins from Disneyland and as soon as we moved here…we picked up Season Passes to Disney. This includes CA Adventure. I have yet to get there and HDR the park. I will soon. I have to pick a nite and go later when the crowds are lower. Maybe next week? I really enjoy Cars Land and this section of CA Adventure where the Wold of Color is held. Look for some cool photos soon! Technology is great…you can download an app that gives you estimated wait times. My favorite is “DL Maps” …its free! 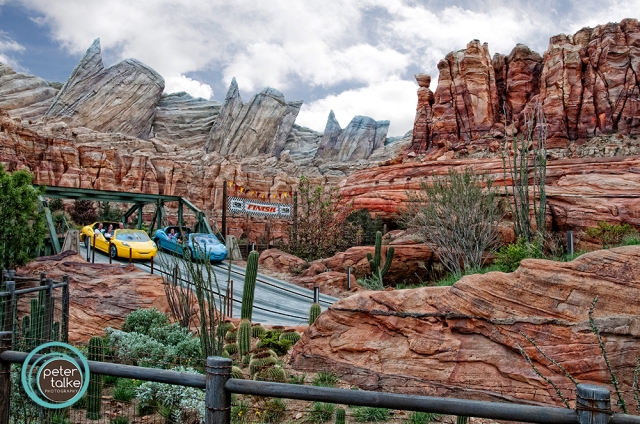 My first visit to DisneyLand and California Adventure was this weekend! I went with my girls and we had a blast. Our first stop was CA Adventure to see the new attraction…. Cars Land! I loved both movies and visiting Radiator Springs would be classic! They did such an incredible job. Our first stop was the Radiator Springs Racers. Its the top attraction in Cars Land. 6 people per car and you take a track around Radiator Springs and even race another car. I’ll admit it was fun! The only tough part was that we arrived at the park a little after 10 AM. It took 2 hours of waiting in line to get to the racers! Whew!! Its new…so that was to be expected! Afterwards we stopped in a few stores…Sarge’s Surplus, Ramone’s House of Body Art, Radiator Springs Curios and had lunch at Flo’s Cafe! It was great to see they do not sell hamburgers and hot dogs there…healthier meal choices…I had steak and potatoes. Delicious! But of course…not cheap! (Its Disney). There are a couple other rides in Cars Land. We just walked around an enjoyed the sights. Also you can pose for a picture with either Lightning McQueen or Mater by the Cozy Lane Motel. They are life size and real. Kinda cool! Cars Land is def fun…we will go back often…we purchased a season pass and look for more pics someday soon!!!

Sorry it has been slow on P2E..I just got back last nite from a 10 day trip. Great to be home! …back to normal next week!

Tough not to pass up on one of the top family destinations in the world! Even as an adult I love Disney! When I was a kid, Sunday evening was the Disney movie of the week at 7 PM. We’d sit at home an watch something like Escape From Witch Mountian and the get ready for bed as school was the next day. Kudos Walt! 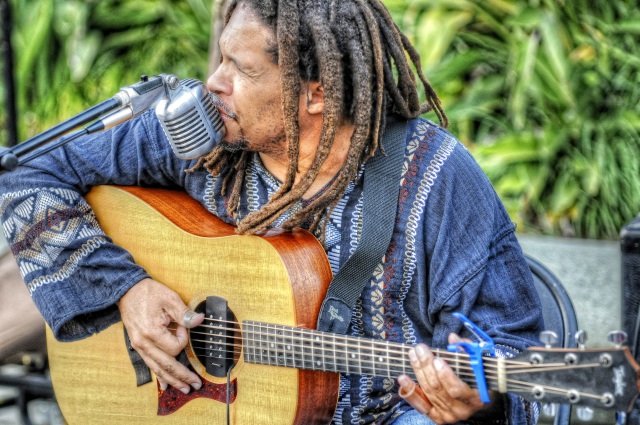 A few years ago when I started processing my first HDR’s…I had a feeling that this photography style would be big!  These days, I must admit there are quite a few great HDR artists…and the list is growing!   The community of great HDR artists somehow or someway know each other….which is very cool!   But these days you can visit many HDR hotspots and see great work all over.   I still love the pier shots, architecture shots, church shots….but every once in a while…take a chance and do something different.

Last year I did my first Motocross and Baseball shots in HDR.   Very cool!   Now its time for musical HDR’s.  We took my daughter to Downtown Disney last summer and enjoyed walking around and seeing the sights and restaurants. Here they have live performers out  to entertain you.  I think my 70-200 was brand new and I walked around snapping hand held shots.  Brother Yusef was playing here this evening and I grabbed a shot of him.   Cool…but why not HDR him.  It was a single shot HDR conversion.  Not bad!   So think outside the box and go out and HDR something new!  Ya never know how it will turn out!

Fall has probably arrived in your location and the weather is now getting chilly…so why not post a nice summer shot from Walt Disney World!  Can’t top these fireworks.  Makes me want to go on vacation with the family right now! If you ever want to work on your firework shots…this is the place to visit!   The show lasts about 10 minutes and you can fire off lots o shots!   Just make sure your tripod is set up and ready to go!  Also, find a good location where no people can trip on your gear and that you can avoid getting the top of their heads in your photo.  Good luck!  Have a blast!!

The photo above is of Mothership Earth at Epcot.  Quite a great subject for photography.  Anything spherical using a fisheye lens can lead to a fun shot.  Tough to deny using this lens in such a situation.  I was about 1 foot away from the middle beam ahead and pointed my tripod upwards to get this effect.   Kinda looks like a transformer or maybe something from Logan’s Run (I may be dating myself).   I think you can photograph this big golf ball for hours.  Yeah, you can take the generic shots, but the fun is to grab something different.  Thanks fisheye lens! 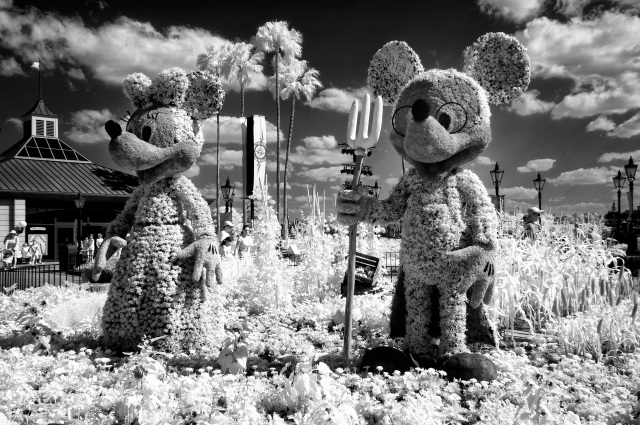 From my visit to Epcot….it is hard to pass up taking Infrared shots of the characters in hedge/flower form!   Mickey and Minnie are looking a bit different today!  Farming a few odd looking crops. Epcot was amazingly a great spot for taking IR shots.    Thanks to sunny warm Florida!

I got to thinking…what does EPCOT mean…so here is some info from the web:   The name Epcot derives from the acronym EPCOT (Experimental Prototype Community of Tomorrow), a utopian city of the future planned by Walt Disney. Disney’s original vision of EPCOT was for a model community, home to twenty thousand residents, which would be a test bed for city planning and organization. This vision was not realized. Disney was not able to obtain funding and permission to start work on his Florida property until he agreed to build the Magic Kingdom first. Disney died before the Magic Kingdom opened and the Walt Disney Company decided that it did not want to be in the business of running a city.

The theme park originally was known as EPCOT Center to reflect the fact that the park was built to embody the ideals and values of EPCOT the city. The park consists of two sections—Future World and World Showcase—laid out in an hourglass shape. Both sections are patterned after the types of exhibits found at world expositions. In its early years, Epcot was often called a “permanent World’s Fair.”

The total cost of the park is estimated at $1.4 billion and taking three years to build (at the time the largest construction project on Earth) Covering an area of 300 acres (120 ha), it is more than twice the size of The Magic Kingdom. The parking lot serving the park is 141 acres (57 ha) (including bus area) and can accommodate 11,211 vehicles (grass areas hold additional 500+ vehicles). 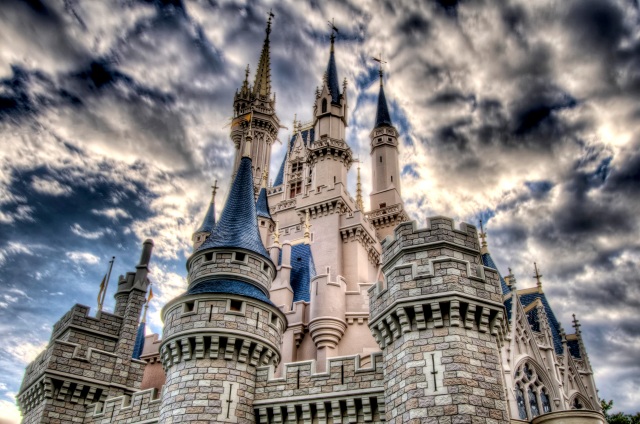 School is out in the US…and maybe throughout the world…so time for summer vacation!  If you have kids…maybe you are heading to Orlando?  Disney is a must visit!!  I went a few weeks ago and took a walk around Cinderella’s castle looking for a cool angle and grabbed this shot!   This is the backside of the castle..still lots of people!   It was ok as I had my lens facing upward!    Is that Peter Pan in the top window?  Nah…he doesn’t come out until the “Dreams’ Firework show.   I’d like to have a full day here to shoot during off season…I bet there are tons of shots here!  I was only in for the fireworks.

Some info from the web:    Cinderella’s Castle is also surrounded by a moat, which contains approximately 3.37 million gallons (12.76 megaliters) of water; however, unlike the drawbridge at Sleeping Beauty Castle in Disneyland, Cinderella Castle can not raise its drawbridge. There are a total of 27 towers on the castle, each numbered 1-29– tower numbers 13 and 17 were deleted before construction when it was realized that they could not really be seen from anywhere in the park, due mainly to the other Fantasyland buildings. The tower with the clock in front is 10, the tallest is 20. 23 is the other golden-roofed tower.

Originally, a suite was built for the Disney family and executives, but since Roy Disney died shortly after the park opened, it remained unfinished, and eventually was turned into an office. There are three elevators inside the castle. One is for guest use and goes between the lobby of Cinderella’s Royal table, and the second floor where the restaurant is. The second is for restaurant staff use, and is located in tower 2 to the left of the drawbridge. It has landings in the Utilidors, the mezzanine level in a break room, and on the second floor in the kitchen. The third elevator is in tower 20, and services the Utilidors, the breezeway, the kitchen of Cinderella’s Royal Table, and the Cinderella Castle Suite. The suite is about 30 feet below the level where the cable is attached to tower 20. Access to the cable is by ladder. Since January 2007 the suite has been used as a prize for the Disney Dreams Giveaway at the Walt Disney World Resort during the Year Of A Million Dreams Celebration.