This shot goes out to all those photographers that have the skills to go around the house and take shots of simple objects and make them look cool!   I had to give it a another try!  I bet if you have been in a photography school, one of the early stages is a project like this?  I just did a walk around with my Nikon 50 f/1.4 lens and grabbed some shots.   Expanding ones photography horizons is all good!   I am curious to learn more about portraits (as you see by my new home studio set up pos t below), street photography, macro and simple abstract photography.

So much to do in so little time!  LOL  I have shot my share of landscape and nature shots…so why not give other styles a try?  Of course I will continue to take my landscape shots, but I’m hoping to branch out in the next year!  Above it a photo of our window blinds with some nice bokeh.  Hope you don’t mind the shot? I’ll get back to the landscape shots tomorrow!  I have a cool one from Houston!  Enjoy!

I had my macro lens out taking some plants in a local garden and thought this one would look cool as and HDR?  Even plants can be HDR’d!  Not sure what this one is called…but it is cool looking!  Any plant experts out there??  I’ll call him Robert.   Robert Plant!  LOL   This may be my first macro HDR?   I know I always say it, but I have to get more macro shots going.  I always enjoy the bokeh they can create.  I think a trip to our local botanical garden is due!

I had to post this wonderful photo…not taken by me!  This shot was taken by my six year old daughter.  We were all playing tennis this past weekend and I brought my 70-200 lens up to catch all of us in action.  My wife and I would all take turns taking a break in the shade and photograph each other.  Near the end of the day we took a few cool fisheye shots and then I switched over to my least used lens…the Nikon 50mm f/1.4.   Its a great small lens and makes it easy to hold the camera for a six year old.  She asked if she could use my camera.  I let her take pictures and she captured some great tennis action and like all kids, they take shots of what they see right near them wherever they are!  Love those shots!!  This shot is of her shoes.  Not cropped at all… as is except a little photoshop work and Nik Color Efex Pro – Tonal Contrast filter and some vignetting.

My little one has her own CoolPix, and always asks to get a “big” camera.  I tell her she can as soon as she is 8 years old.   She already knows well about HDR ‘s, IR and Portrait photography.  If she wants to continues to learn, I will not hold her back.  The view from our kids eyes with a camera in their hands is wonderful to see!!

If you are a photographer or are the chosen one in the family to catch all the pics…share the wealth!  Let your wife/husband and/or kids grab a few shots!  I really don’t push them to join in the fun…Ill let them decide that on their own….but my hopes are one day to have all of us with DSLR’s heading out on a photographic trip!  So share your camera with your loved ones (I know its tough to give it up)…ya never know…they might have some skills!!!!!    Have fun! 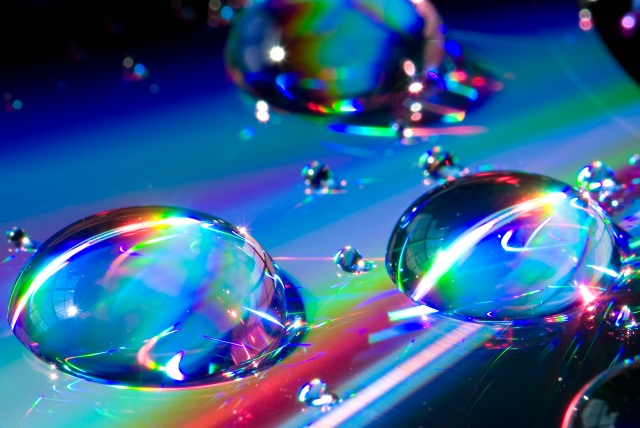 As I consider myself a landscape photographer…I always enjoy seeing the photos the people post on Flickr of marco shots where you have to look closely and figure out where and how it was done.   Photography offers never ending options and styles.  I hope one day to get to em all!  Macro work has always been a favorite of mine.   The small details become large and very interesting.   I will try this spring to go out an work on macro shots with wonderful wildflowers we have in Texas.   But why wait until the spring…macros shots are all over your house.  I bet if you gave yourself a photo assignment of shooting household items in macro…you will come up with some cool photos!

One shot I always wanted to try was putting water drops on the back of a CD. Simple and easy to do…just lay a CD down, fill a cup with water, use a straw to create the water drops and a spray bottle to create smaller droplets…add in sun from a window and this is what you get using a macro lens.  Try a few angles..crop if needed and a cool shot appears!   The drops create a nice prismatic effect.  Go out and have fun with your camera.  There is a wonderful world out there to explore!

As the weather out there gets cold and old man winter takes over….why not post a nice summer water lily!   With a little bee hanging stopping by to say hello!  I just love these flowers.  Sorry this photo is not equal to the Monet paintings – Water Lilies…but I hope the color brightens your day! 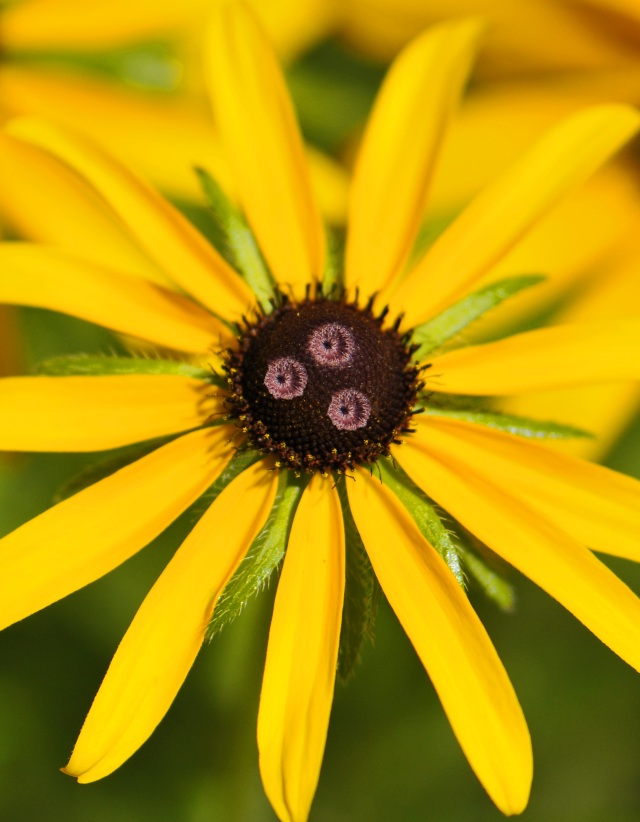 Here is an interesting photo of a daisy!  All I can think is….”Oh No Mr. Bill!!!”   From that clay figure in the 70’s – Mr. Bill (Saturday Night Live).  I think I may be dating myself.    I am not a flower expert…but I think this is a daisy?   Hope this little guy brightens your day! 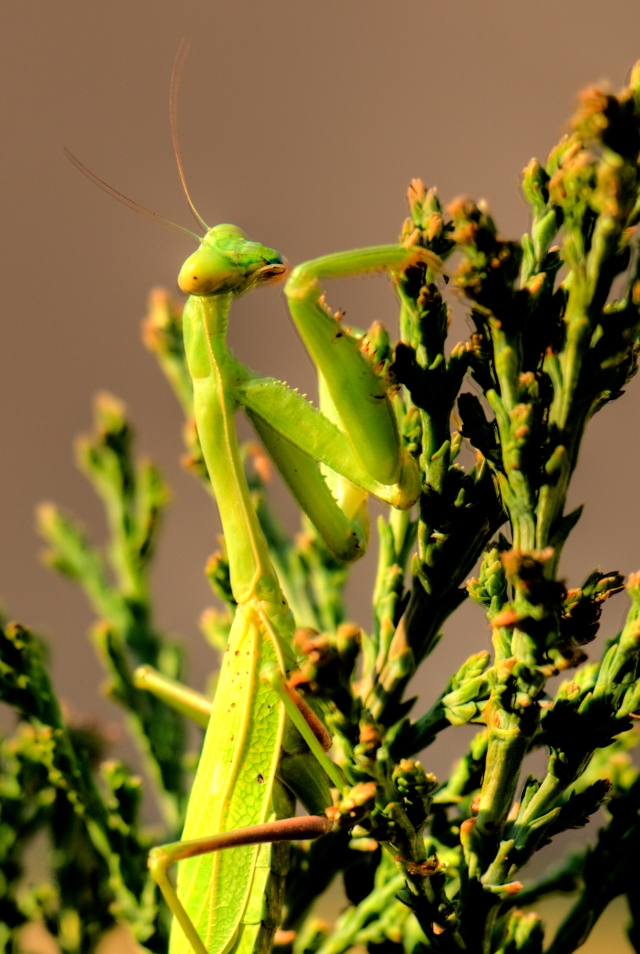 Here is a cut little guy that posed for me in my backyard one day.   Praying Mantis are great subjects as they stand very still!  He was cool and let me set up my camera and tripod with a nice telephoto zoom!  The lens was probably only seven inches away as he looked at what I was doing.

I was not sure how an insect would  look as an HDR.  One great idea I have would be to shoot a butterfly in HDR…but they move a little too much…so it may be difficult.   But this Mantis came out solid!   Here is some info on these amazing insects: Mantodea or mantises is an order of insects which contains approximately 2,200 species in 9 families worldwide in temperate and tropical habitats. Most of the species are in the family Mantidae. Historically, the term “mantid” was used to refer to any member of the order because for most of the past century, only one family was recognized within the order; technically, however, the term only refers to this one family, meaning the species in the other eight recently-established families are not mantids, by definition (i.e., they are empusids, or hymenopodids, etc.), and the term “mantises” should be used when referring to the entire order. A colloquial name for the order is “praying mantises”, because of the typical “prayer-like” stance, although the term is often misspelled as “preying mantis” since mantises are notoriously predatory. The word mantis is Greek for “prophet” or “fortune teller”. In Europe, the name “praying mantis” refers to only a single species, Mantis religiosa. The closest relatives of mantises are the orders Isoptera(termites) and Blattodea (cockroaches), and these three groups together are sometimes ranked as an order rather than a superorder. They are sometimes confused with phasmids (stick/leaf insects) and other elongated insects such as grasshoppers and crickets.

What was cool about this guy is that he must have had some babies recently as soon as we saw him, a little baby mantis came into our house when the door opened the next day!…so cute!  He was afraid of us yet curious.  I love when their heads turn as they watch you move…such beautiful insects!

I have always been a fan of butterfly photos.  This little guy was in my backyard in the spring.  He was very gracious and posed for lots of photos for me.  Usually butterflies fly away as you get close.  I used my Nikon 105 Macro hand held for this shot.  I was probably only 6 inches away from him as he was taking a drink.  Not sure why he was so brave?  Sometimes you get lucky!   Its always tough to notice when you are taking shots….but its always neat to see the location of their eyes when you take a look at the photograph afterwards.   Are they looking at you or the flower?    Interesting creatures!   I would really one day try an HDR on a butterfly!  Now that might be cool!   Enjoy!

Thanks again per my post below for visitng….50,000 visitors in 5 months!!!!   This will just be a quick photo post of a water lily from Zilker Botanical garden here in Austin.  I enjoy photographing these flowers…they are my favorite!   This one was taken hand held on a nice sunny hot day!

I hear the new Nikon D300s (HD Video) has been announced today…comes out in August for $1799.00!   And also they introduced a new version of my favorite travel lens….the Nikon 18-200 VRII (it has zoom lock to keep the lens in place on your neck and also improved coating to help out with lens flare) for $845.95 – out in September!    Enjoy your day…time to start saving for some new Nikon products!

While I was in Nurnberg walking around the Hauptmarkt (shopping area).  There were tons of little shops.   I stopped in one that looked fairly large.  I have heard Nurnberg is known for toys so I wanted to see what they had.  My goal was to find a cute toy for my little one (she is 4 years old).  Most everything was so wonderful!  Unfortunately they were all handcrafted items such as; beer steins, cookoo clocks (they were awesome!), plates, and amazing wood carved people (soliders, Santas, workers, etc…).  Everywhere I looked was a special sight to see!!   Not much for a 4 year old, but I did see these brilliant glass spheres hanging from the ceiling.  I thought to buy one, but I still had 1 week of travel left and a long plane ride…how would it survive without breaking?   I will go back later this year more prepared and pick one up!

German craftsmanship is tops in my book!   I was mesmerized at everything I saw. A wall of cookoo clocks brought me back to my childhood.  We had one growing up.  The steins were beautiful!  I luckily had my camera and took a few shots for fun.  The picture above had very nice bokeh.  For those that may not know what bokeh is…bokeh is derived from a Japanese word “boke” meaning blur or haze. Its a photographic term reffering to the appearance of a light sources in an out-of-focus area of an image caused by the camera lens using a shallow depth of field.

I thought the image had a dreamy feel to it and I opened it up on Color Efex Pro 3.0 and added a soft focus effect to it.   Hope you enjoy!