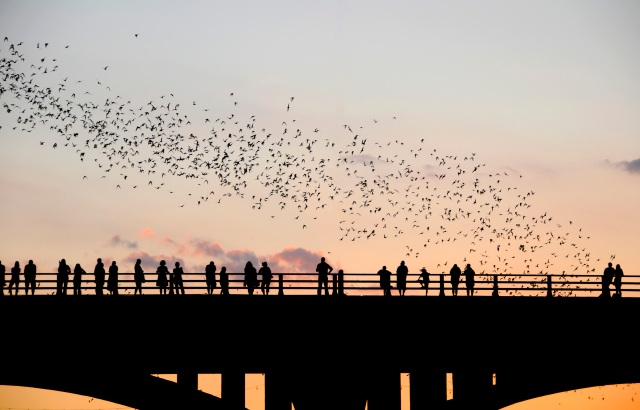 Its been a while since I last posted my Bats of Austin shot.  I get tons of requests to use that for all types of products.  Thanks everyone for your interest!  I think that older photo will be a cover of an Austin Field Guide this upcoming year as well (thanks to Getty Images).  Getty owns that image and I recently tried to find one that is different.  Here it is above!!  Version 2!  I knew I had taken a few extra shots from this evening.  Always nice to go back in time and search photos…you might find a great shot!

For those that do not know…The bats of Austin take off from under Congress Street Bridge (downtown) during the summer months and it is an amazing sight to see!   We went up a few times this past summer, but did not see any bats.  I heard rumors of sickness, winds, etc…  Not sure what to believe.  Hope they come back next year.   I have only been in Austin a few years, so if anyone has details on this past season…please post it in the comments…thanks!

We have lived in Austin for over 2 years and my wife has always wanted to take the bat boat bat cruise here in Austin.  With family in town – it was aperfect time!  We took the Capital Cruise Tour.  It departed the dock around 7:45 PM.  Sunset in Austin was 8:27 PM last nite.  Cost is about $8.00 for adults and $5.00 for kids.

Here is a little info on the bats from the web –  The Congress Avenue Bridge spans Town Lake in downtown Austin and is home to the largest urban bat colony in North America.  The colony is estimated at 1.5 million Mexican free-tail bats.   Each night from mid-March to November, the bats emerge from under the bridge at dusk to blanket the sky as they head out to forage for food.  This event has become one of the most spectacular and unusual tourist attractions in Texas.  The most spectacular bat flights are during hot, dry August nights, when multiple columns of bats emerge.  There are several points from which to view the event. 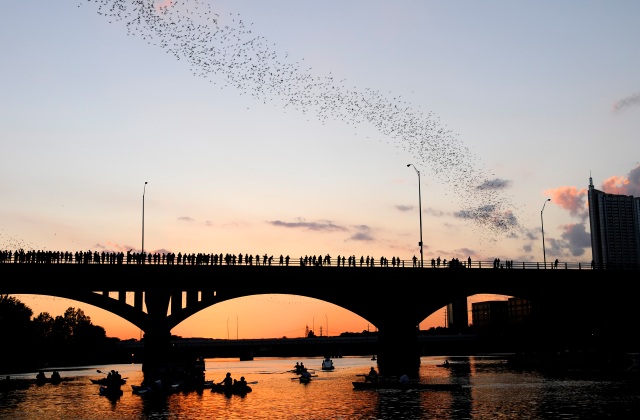 I thought 2 pictures from this cruise will give you a feel for the bats.  As the boat took off the driver was very informative and noted many items about Austin I did not know.   One of interest was that in the past Texas was its own country and through the years has had 6 different national flags per ownership  (Mexico, France, Spain, Texas Republic, Confederate, and US).  This is where the theme park  “6 Flags” gets it name!

There are some beautiful views of the city from on the lake.   As the sunset, we were about 30 yards from the Congress Bridge where the bats live.  Then like a fire drill – thousands of bats take off into the night.  They leave in bunches and it is an amazing sight to see!    They help out Texas by eating lots of bugs throughout the evening!

Definately a fun experience.  As you can see there are many ways to see the bats – boat cruise, rent a kayak, stand on the bridge, eat at TGIF’s or just stand on the side of the river.   Just remember that its HOT in Texas during the summer – so don’t forget some water – we did – whew!  It was about 100 degrees last nite at sunset!  If you are in Austin and have a chance to see the bats – I’d say do it!  You can’t strike out with the Bats!!

UPDATE:  The top photo will be published in the October 2009 issue of Texas Monthly.