I fly into Denver a decent amount a times per year. Every time I ride the car rental shuttle bus I pass this super cool Bronco statue. Tough to miss! I always say…I have to grab that shot one day! It is located in the middle of the major roads going in and out of the airport. This day I was driving back to the airport early and decided to pass the Hertz return center and pull on the shoulder….park my car and take the 5 minute walk up to the Bronco with my gear. Not sure if it is the safest idea…but sometimes to get cool shots, ya gotta do dumb things! The surrounding area is not great…so I added some textures to spruce it up. It was taken during the winter time and was a bit chilly this day as well! Now I can take this shot of the bucket list!

From the very cool Frankfurt Airport…this area is located near the DB (Deutsche Bahn) long distance trains. Looking to head to Berlin, Zurich, Prague? Book your reservation and make sure you have a designated seat! Many times I have booked my reservation without a seat #. I have had to move around and even one time sit in the area in-between the train cars….oh so comfortable! My favorite are the ICE trains with the dining car! Always nice to stop by get and grab a frankfurter while on the ride! I really wish we had a nice train system in the US. I love traveling by train in Europe. So beautiful! The effect of the photo was helped by “Urban Sickness” filter on onOne’s new and amazing Perfect Effects plug in.

I have never posted a video on my blog…this is my first. I was recently in Innsbruck and while walking to my plane (yes that is my prop plane!) to this vid with my IPhone. This is my fav airport in the world to fly in/out of…just unreal mountain views (especially when snow is on the mountains). Here is a shot from out my window flying in. Photo via my IPhone and Camera+ App to add the effect. 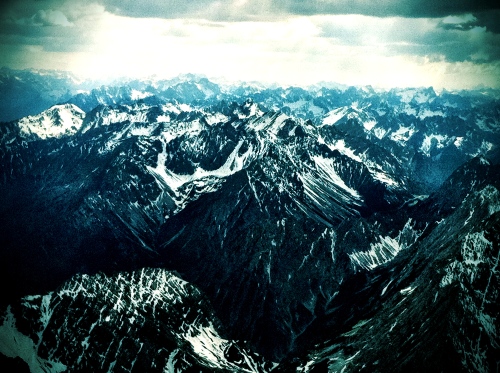 Hope you enjoy! I will be working on some video reviews coming soon…with a better camera! =) Have fun!

If you have ever flown into Orange County Airport/John Wayne Airport/Santa Ana…many names!  You might have seen this statue of John Wayne near the pickup area.   I have been there tons and always wanted to grab a photo!  Recently I walked by with my gear and took this hand held shot.    It is quite impressive with the American Flag hanging in the background.

Some info from the web:  On June 20, 1979, the Orange County Board of Supervisors renamed Orange County Airport to John Wayne Airport, Orange County. The John Wayne Associates commissioned sculptor Robert Summers to create a bronze statue of “the Duke” in commemoration of the late actor and true American patriot John Wayne.  The nine-foot statue was dedicated to the County on November 4, 1982 and placed outside, in front of the Eddie Martin Terminal.  After the Thomas F. Riley Terminal was built, the refinished and restored statue was placed in the lobby of the new Terminal. The John Wayne statue is located on the Arrival (lower) level in the center of the Riley Terminal and rests atop a pedestal covered in the same marble that graces the entire facility. Designed in two tiers to allow visitors to touch the statue, the pedestal provides a fitting home for one of the nation’s most loved and most remembered patriots.