From the lovely city of Vienna, Austria you can find the Schonbrunn Palace. Some info from the web: Schönbrunn Palace is a former imperial 1,441-room Rococo summer residence in modern Vienna, Austria. One of the most important cultural monuments in the country, since the 1960s it has been one of the major tourist attractions in Vienna. The palace and gardens illustrate the tastes, interests, and aspirations of successive Habsburg monarchs

This photo was processed using the new onOne Software Perfect B&W. With the recent Google/Nik issues…I decided to try onOne’s Perfect B&W. Wonderful! I must say…better than NIK Silver Efex Pro. More filters and tons of options!! I think Perfect B&W is now my first choice!

Act fast on onOne products today!!! They have a 40% off sale that ends March 29th!!! Clicking the photo below will take you to their site for more info!!

From a recent real estate session in Orange, CA….this a beautiful back yard patio. Perfect for relaxing or for a cookout! I have been shooting a little more HDR’s for Real Estate. Here in SoCal…lots of houses are always up for sale! We pick up the local housing catalogs and so many of these magazines have very bad HDR house photos. Most agents do not realize the pics are a bit lackluster. Halos and inconsistent light in most pics. But for photos…beauty is in the eye of the beholder…so maybe it works for them?

I think most of the HDR shooters in this area are “turn and burn”. Meaning they shoot, process and quickly move on to the next job. Its about job quantity for them. Quality takes a hit. HDR’ing is art…if done properly. Real Estate agents deserve better photos. If you are an HDR artist…give this business a try!! House photos are typically the first item potential buyers see….you only get one chance to make a first impression!! Your pics should bring people in the door!

From Riverside, CA…one of the most beautiful classic hotels….the Mission Inn Hotel & Spa. A hotel filled with old world charm. This was my first visit. A lovely place to see if you are in the area. The photo above is a fisheye of the amazing rotunda. Probably the most photographed location at the hotel.

Some history from the web: From its modest beginnings as a 12-room adobe boarding house to its current stature as one of the finest hotels in the United States providing a total of 238 rooms and suites, The Mission Inn Hotel & Spa has been the cornerstone of Downtown Riverside since 1876.

By the 1890’s, Riverside was the richest city per capita in the United States. The consistent influx of tourists to Riverside made Frank Miller, the Master of the Inn, recognize the dire need for a grand resort hotel. And so, the evolution of The Mission Inn began. Frank Miller opened the first wing of his new hotel in 1903. The Mission Wing was built in Mission-Revival style architecture and incorporated different structural elements of the 21 California Missions. Mr. Miller went onto add three more wings to his hotel: the Cloister, the Spanish, and finally completed it with the Rotunda wing in 1931.

Here is an old rusty truck in HDR and it looks like it has lived a full life. Tow Mater would be jealous!

The view of Pittsburgh, PA from atop Mount Washington in Infrared. Not a winter photo, but taken in the middle of the summer! I gave it the old time look for the classic “Burgh” shot.

If you are ever in SoCal…in the middle of LA and SD you can find the city of Irvine. This is where you can find the cool outdoor shopping location called the Irvine Spectrum. Great stores and restaurants!! I have passed it about a billion times and finally decided to photograph the ferris wheel. This was a long exposure. I did however get talked to by security. Unfortunately it is private property, therefore, no tripod setups for photos. But one loophole is that if you are taking shots of your family, they cannot stop you. I had my little one stand in front and “photoshopped” her out. =) Have fun!

Here is the wonderful Casey posing at the San Clemente Pier in this HDR Composite. Casey plays for the local Water Polo team. They just completed their season and are now CIF Champions! Congrats to the team and Casey! Great season!! This HDR Composite uses of my my new backgrounds now available to purchase! You can find it here…San Clemente Pier. All backgrounds can be seen here…

Thanks for looking and have a great weekend!!

I have always loved the before and after shots people post on the net. Many non-IR photographers may not know how a IR photo looks directly from the camera. You can see it above! Processing an IR shot is easy…but you need to know how to work some photoshop magic. This is the full version processed shot below. Enjoy! I may post some HDR shots like this soon!

Porto, Portugal is a stunning old city. I am lucky enough to visit every couple years. My favorite hotel to stay at is the Pestana Porto Hotel. Some info from their website: Pestana Porto is one of the best hotels in Oporto, located in Praça da Ribeira in the heart of the historic core of Oporto, and standing on the city’s medieval walls, with a magnificent view of the river Douro.

This hotel in Oporto occupies part of a block of 16th, 17th and 18th century building, and has been classified World Heritage by Unesco. Its privileged location makes it possible to cruise down the river Douro, departing from the bank right in front of the hotel, and to take the historic tram to Foz do Douro or visit one of the Port wine cellars.

The shot above has a bit of a grunge look…I use onOne Software Photo Tools 2.6 to get this effect. My favorite setting is “Brian’s TKO”. Click and you get an instant grunge shot!

onOne recently released Perfect Photo Suite 7!!! I have been playing around with it and love it! I will write a review soon!! Get your copy today!!! 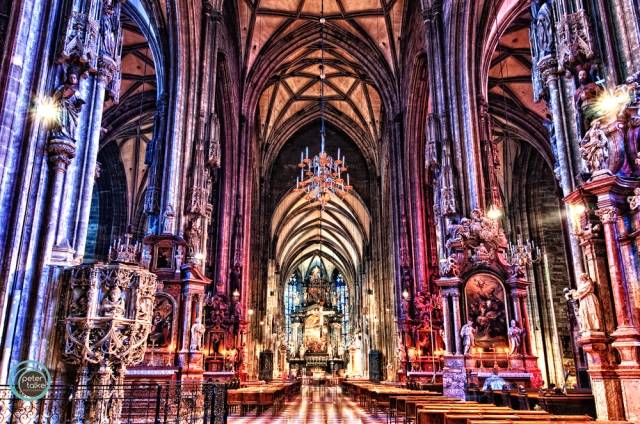 From the beautiful Vienna, Austria…one of the largest churches is St. Stephens. I walked into the church this day with my camera ready and set to bracket my HDR. I was able to grab these 7 brackets, then the tripod police nabbed me! At least I was able to capture this shot above!