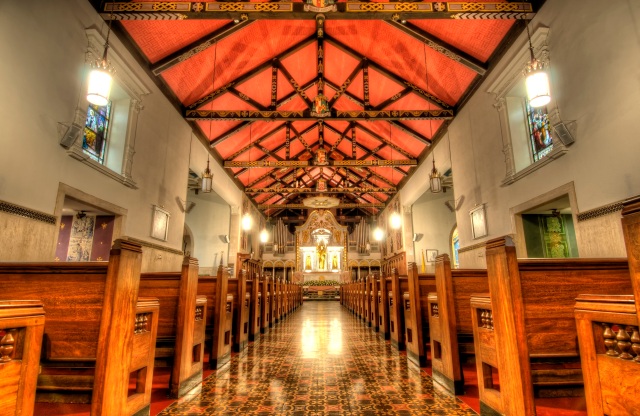 One of the top sights to see in St. Augustine is the Basilica.  A beautiful little church…a must visit while you are in town!!

Here is some info from the web: The city of St. Augustine was founded and established in 1565 by Don Pedro Menéndez de Avilés. He began his adventure by sailing from the port of Cádiz, Spain. On August 28 of that year his expedition first sighted land along the east coast of Florida (the area that is today Cape Canaveral). It was the feast day of Saint Augustine of Hippo, August 28. Menéndez decided to give that saint’s name to his first settlement.

While Catholicism may have seemed dead in Florida from the arrival of the English, since all the Catholic Spaniards departed for Caribbean ports, the arrival of a workforce composed of Minorcans, Italians, and Greeks in 1767 at what is now New Smyrna Beach led to the resurgence of the Catholic faith on the peninsula and, eventually, in the City of St. Augustine. When Andrew Turnbull’s plantation in New Smyrna began to fail in 1777, the laborers, under the leadership of Francisco Pellicer and Father Pedro Camps, sought refuge in St. Augustine. With their arrival, a rebirth of the faith in the city took place. When Britain ceded Florida back to Spain in 1784, Spanish Catholicism returned, as well.  In 1786, the Spanish crown ordered the construction of a new parish church for St. Augustine. The property bounded by St. George Street on the west, Treasury St. on the north and the plaza to the south was chosen as the site. The cornerstone was laid in 1793 and the church was completed in August 1797. The first Mass was celebrated on December 8, the Feast of the Immaculate Conception.

History is wonderful!  I enjoy reading these little tidbits when I make a post.   I visited a Fort here in St. Augustine called Castillo de San Marcos.  Always fun when you visit a castle or fort that has cannons pointing out for protection.  St. Augustine is indeed rich with historical relevance!