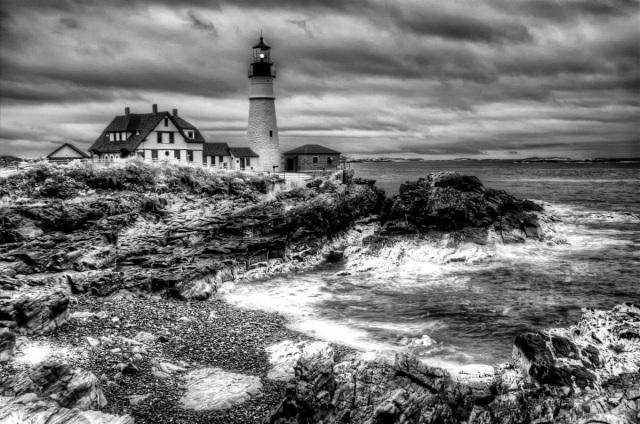 I was traveling in the North East this past week and had a evening to stay near Boston.  I had never been to Maine, so why not spend the nite in Portland!  What is in Portland you may ask?  One of the most photographed lighthouses in North America…the Portland Head Light.  I wanted to see it for my own eyes.

It is quite beautiful!  I arrived early this morning at sunrise to get this photo.  It was a little chilly with the ocean breezes about.   While it was still dark out, I was setting up my tripod and just about 500 yards away I could see 2 lobster boats heading out for a mornings work.  The waves were a little choppy and the boats were lit up beautifully.   With nobody around and the sound of the waves crashing into the rocks…it was one of those moments that you don’t forget…special and very sureal.

The sunrise started and I primarily took HDR photos for an hour+  The morning was cloudy and it was raining a bit when I arrived, but had stopped luckily for my photo session.  I took shots from every angle.  So I will post standard HDR shots later this week!  But after I had completed my HDR’ing with my Nikon D300.  I decided to try a few Infrared-HDR’s with my Nikon D70S.

I have been growing in my knowledge of IR shots in the past few months.  But one area I was eager to try was and IR-HDR!   The week before I tried one in Austin…it was sunny and it just did not come out correctly.  The Nikon D70S only can take 3 brackets…  -1, 0,+1    What I saw was that during bright sunny days, the +1 was just too bright and blown out!  So an IR-HDR failure.   This morning, it was cloudy…so I wanted to see how an IR-HDR goes with this weather condition.  And here you have it!   Success!!!   Post processed in Photomatix and used Silver Efex Pro for the B&W conversion.  A very different HDR!

I’ll post a color HDR later this week and give you details on the lighthouse.  Then another post another time, details on Portland.  I very nice place to visit and a fun Place 2 Explore!